After local Council receiving numerous complaints about loss of community amenity being caused by people renting luxury houses for Short Term Accommodation and holding loud parties, a temporary local planning instrument (TLPI) has been endorsed by the State to enable residential premises being used as ‘party houses’ to be regulated. This is called the Party House TLPI as it is specific to Short Term Accommodation being provided for a previously undefined land use.

So what is a Party House?

The most recent version (8) of this was adopted in August of 2017 and remains unchanged as of the City Plan Version 6 which defines a Party House as:

Premises containing a dwelling that is used to provide, for a fee, accommodation or facilities for guests if—

Council might feel like it is doing right thing by establishing a process to promote and accommodate the specific land use of ‘Party House’ but in reality, all it has done is highlight the disconnect with what people were wanting to do (short term accommodation) and what Council were attempting to do. This is highlighted by the fact that not one (1) application for the specific land use of ‘Party House’ has been lodged with Council despite the process first being endorsed by the State in 2014. While Council may feel they are preventing a ‘fraternity style’ type of activity infiltrating our suburbs, the reality is that most people simply want to let their property in a short term capacity for families and other larger groups in a more personal  setting than that of a hotel. 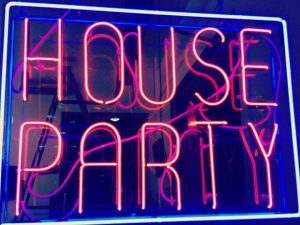 Establishing the above TLPI in 2017 highlights the seriousness to which Council is taking to mitigate the potential ability for a land use to compromise the amenity of suburban neighbourhoods. While Council may have applied these strict requirements to protect residential amenity of a “typical” suburban neighbourhood, Party Houses are not allowed to operate there. Only in the centre of Surfers Paradise are ‘Party houses’ able to operate within an even smaller designated ‘party house area’.  While an extract is provided at right,  the full document is accessible by clicking here or on the image. 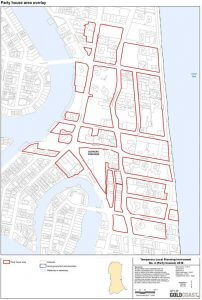 No Party Houses outside of this nominated area are considered acceptable.

What is permitted in ‘Party House’ Approval Zone?

Not much. Not only does the small area restrict ‘Short Term Accommodation – Party House activity’ being undertaken lawfully, the numerous constraining conditions associated with it remove any fundamental feasibility or practicality to its operation.

Non-negotiable requirements further undermine the appeal and practicality of this use such as ensuring all guests have left the premises by 9pm Sunday to Thursday or 11pm Friday and Saturday nights, irrespective of how much noise is being made. This is akin to having the parents come and knock on the door even if you are playing quietly.

Car parking is to be provided at a rate of one (1) for every bedroom and one (1) space per two (2) visitors permitted to lawfully occupy the premises for its class of building. This alone effectively removes the ability of most apartments to be able to comply. Seldom do apartments have more than two (2) car parking spaces meaning that they are unable to apply. While most houses do have at least two car parks, most houses are 3 – 6 bedrooms increasing not only the number of car parking for guests (1 per bedroom) but as the size of the house increases, so too does the required numbers of car parking which states it must be 1 space per 2 visitors that can lawfully occupy the premise. In a 4 bedroom house with 6 guests (a reasonable number), no less than seven (7) car parking spaces would be required on site. Some Party right?

It is these constraining requirements that have removed the appeal and feasibility of undertaking a lawful Party House Land Use thus not one (1) Party House application has been applied for. To side step this, and avoid being defined as a Party House, advertising associated with short-term properties will often stipulate strict terms and conditions such as “no bucks parties, hens parties, raves, or wedding receptions etc.”

Often with such strict requirements, activities inevitably will still occur despite the best efforts of regulation.

City Plan Planning have been working with several key stakeholders in these instances including local governments, the Unit Owners Association of Queensland Inc (UOAQ) and the Australian Resident Accommodation Managers Association (ARAMA) to keep abreast of the increasing enforcement of such amenities starting to emerge post-Commonwealth Games.

Stay tuned for that update…

As always, if you would like more information on any of the above, click here to contact us and we can guide you through the process or help address any question you may have.