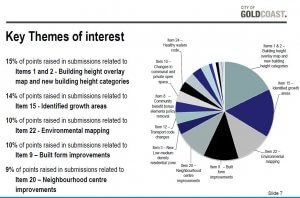 Preliminary overview, the first town planning, public consultation period has wrapped up with 1,203 submissions made to Council.

Overall, roughly 30% were in support, 30% against and 40% not clear. More details are available on Gold Coast Council’s, Our City Our Plan website .

Some specific areas were dominated by negative sentiment with the major changes proposed in Palm Beach, being smashed by residents. Councillor Caldwell, after meeting with planning officers, circulated a proposed zone, height and density map which covers nine blocks of beachfront. As a result of negative feedback, the eastern side of Jefferson Lane will change from medium density to low-medium density, almost halving the existing height limits.

The new 16m height limit will allow for buildings of only four levels with developers no longer able to get a 50 per cent uplift in their designs. The residential density will be one bedroom per 50sqm. On the western side of Jefferson Lane, the height again will be halved, to 17m or five levels, but developers can get a 50 per cent increase. Cr Caldwell wrote to area councillor Daphne McDonald, who was absent when the changes received the unanimous backing of councillors at the meeting.

“For some time I have been considering a potential solution for the issue of the limited capacity of Jefferson Lane and yesterday I asked council officers to prepare what I believe our best option at this time to help address this issue,” he wrote. Fundamental capacity on roads, and other infrastructure is a key element in being able to achieve the desired targets. This also applies to pockets of Labrador and Southport where more intense developments was suggested but noting the small lot layouts and lane ways, pockets in these areas are also likely to be severely curtailed in their development potential.

City Plan Planning made several submissions in support of land owners as part of the previous exercise and have paired some up with experienced development experts to maximise their sites potential while also minimising risk. If this is of interest, get in touch.

Second consultation period is expected to be undertaken from early January to February 2020.